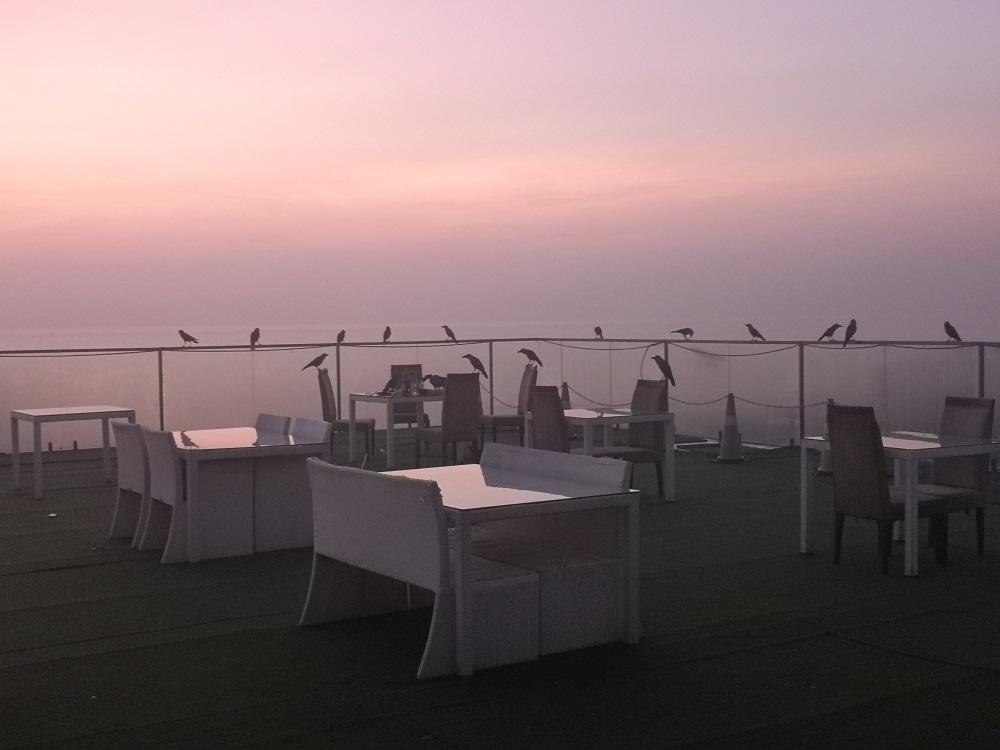 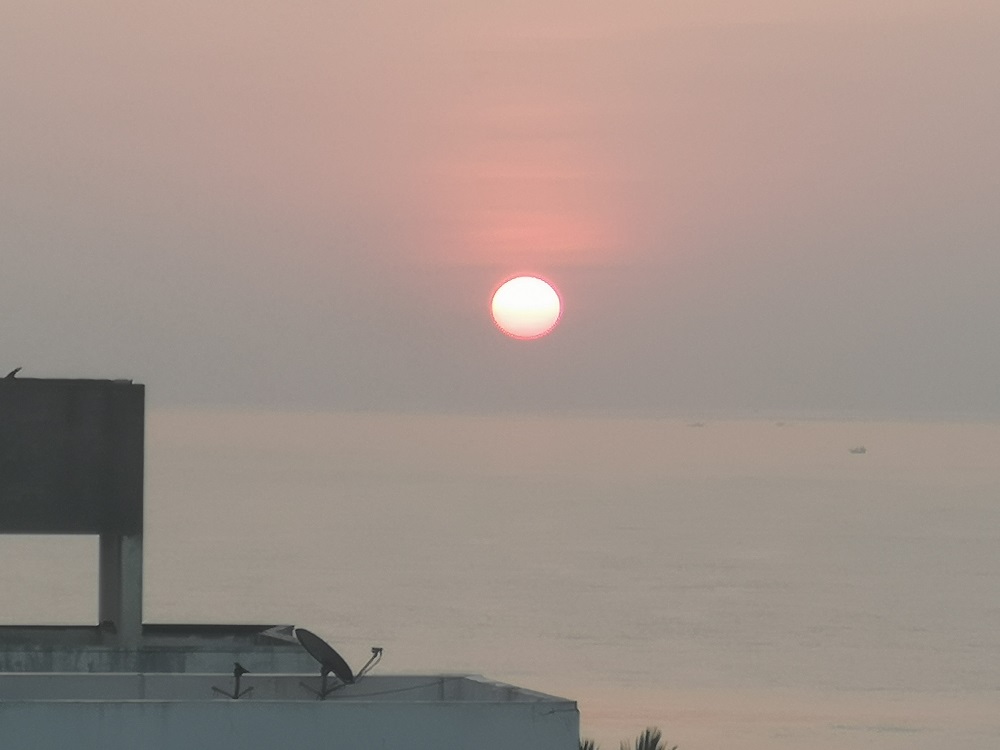 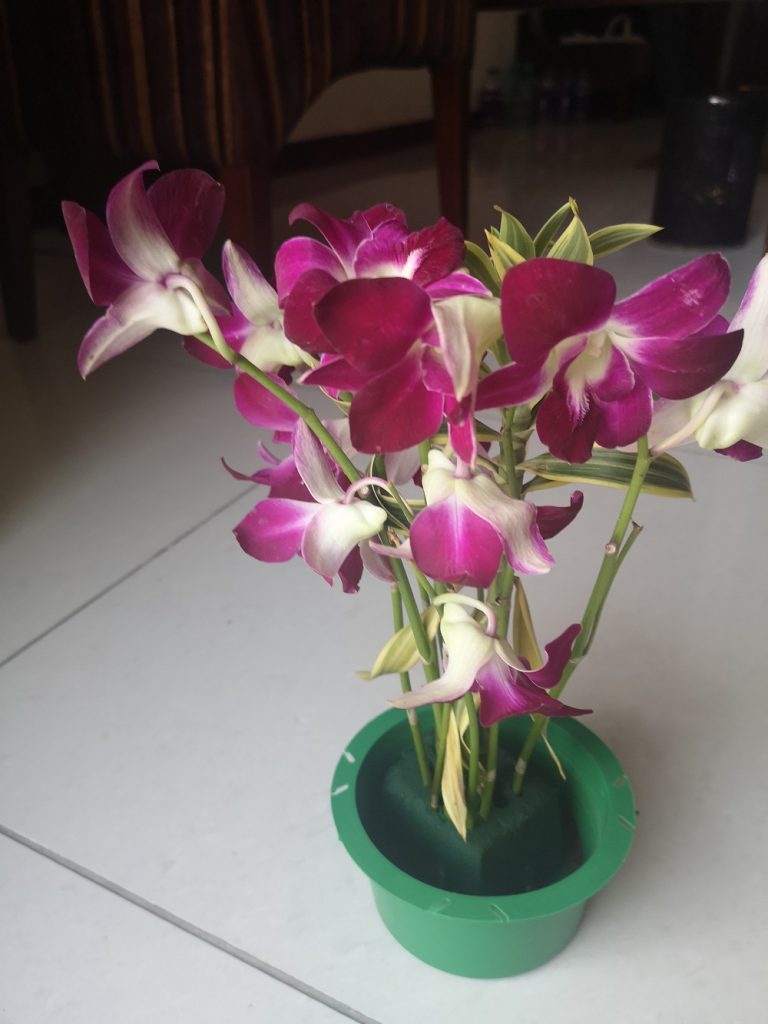 I am very well. I actually had a lot to do every day. First, I tell you about my meditations: I can rest well within myself. The silence, the inner light, the energy, have become my partner. In addition, there is a living heart center that radiates.

We have power outages here at the hotel again and again. Without air conditioning I have here 29 degrees in the room and stuffy air. After such a night you wake up shattered. Of course, the WLAN is also affected by the power outages. I sit, so to speak, alone in the heat. During the day I go to the terrace. This morning I went there at 6 o’clock. I wanted to welcome the sun. The crows were already waiting for the sunrise. You seem to have a sense of the moment when the sun rises above the horizon. A few minutes later, they began to fly away. Not all at once, so slowly one crow followed the other. It was not until much later that the sun appeared for me. But I was also touched by how the mood changed, in the moment of the real sunrise.

I have been invited to the annual meeting of the DGH, the umbrella organization for spiritual healing. Since our association is a supporting member of the DGH, I should also come to the newspaper. The editorial deadline is shortly after my arrival from India. So I sat down to write an article about self-healing. That is what I was asked to do. The motto of the annual conference, which takes place in autumn, is to open up the DGH to spiritual currents.

Now I come to the topic that gives me the most pleasure: it is the self-healing seminar that Balaji has organized for me here. There are 15 participants, just a little more women than men. The first time together was very exhausting for me, as I had to realize that almost everyone cannot perceive themselves spontaneously. That’s the most important thing, that energy body and physical body unite. Yesterday I asked Balaji to practice alone with him an hour before. He could only perceive his hands well. From the hands we managed to become conscious throughout the body. That was the key to wholeness here. In the group we did the same thing. Everyone was lying on the floor, scattered in this large room. I talked about an amplifier into the microphone that everyone could hear me. Since the fans were running on the ceiling, we had a large noise level, which was drowned out by my amplified voice. Lakshmi became my greatest joy. She is totally enthusiastic about the exercises. Writes down the texts immediately and ask me to correct or supplement them. Somehow she reminds me of Christian, also in her enthusiasm. During the break, she explains the exercises to the others and is therefore a great support for me. I believe that she has a good organizational talent. The area where I live here is lovely. She has not yet known this area herself and immediately ordered a room for me. But then I asked her to cancel the room again, because the bill came to payment. I don’t want to have a room I’ve looked at before. This hotel is right next to my hotel. I assume that I will live in it next time.

The next one is the small restaurant where I have lunch. It has 5 tables and 18 seats. It is a family business. Yesterday this room became full, for the first time. In the beginning I was still alone. Most guests take the food with them. When I was almost done with the food. Came a group of men. When I saw that they had too little space, I released my table of 4 and asked to put my food on the table of 2. I had just drunk my last sip of water when 4 men came along again. I have never experienced such a full house so far.

Nice are my walks along the coast, along the sea. The coast is cleaned daily in the morning.